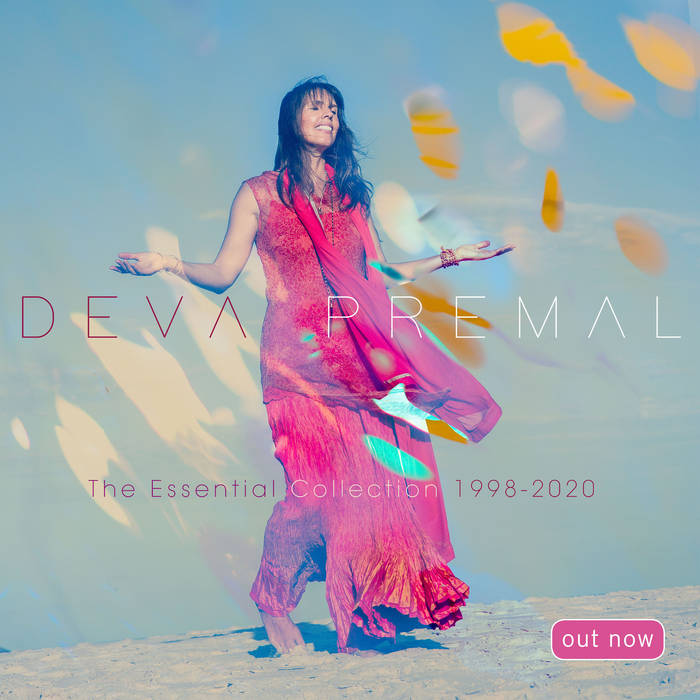 CURATED AND EDITED BY MITEN

The beloved mantra singer Deva Premal celebrates 22-years of creating beautiful music with the release of The Essential Collection, a three- disc compilation, lovingly and expertly curated by her musical and life partner Miten. This enchanting compilation spans Deva’s entire recording life, from her debut solo album The Essence, released in 1998, all the way through to her 2020 Grammy-nominated album DEVA.

Many of Deva’s best-known tracks are featured here, notably the original version of Gayatri Mantra, which introduced the world to the power of mantra chanting at a time when “mantra singers” were unheard of. The track now boasts in excess of 20 million plays on Spotify. Other signature hits include Om Namo Bhagavate (from the Embrace album, released in 2002); Aad Guray (from the Dakshina album, which reached the mainstream Top 20 Amazon chart in 2005); and Seven Chakra Gayatri Mantra, the glorious, life- affirming chant (from the DEVA album) which brings the project full circle.

As well as these landmarks, The Essential Collection charts a pathway deep into the interior world of Deva’s music. “I wanted to compile a sequence of music that would give maximum listening pleasure,” says Miten, who has mentored Deva since the beginning. “It was important to create a flow that showcased the full range of such a beautiful body of music that we created together.”

Miten chose tracks from the early years for Disc Three, making some edits where appropriate. Moola Mantra and Aad Guray stand as great examples of “classic” Deva, while White Tara, an unexpected collaboration with the Gyuto monks of Tibet, is testament to the singer’s enduring sense of adventure. “Her duet with the senior monk Sonam Dorje on White Tara shows the depth of her desire to share the roots of her craft with her audience,” Miten says. “It is also indicative of the meditational quality that runs through her entire catalogue.”

When Miten came to compile the music from the later years (post-2010), most of it produced by himself and Joby Baker, he unearthed an embarrassment of riches. “There was so much and it was so good that it needed another two discs to capture it,” he says. Taking the listener on a musical journey that encompasses the devotional tones of Sarveshaam Mantra, the pop melody of Nandana Gopala, the seductive, smooth-jazz crossover territory of Narasimha and the trancey, dancefloor rhythms of Aham Prema, The Essential Collection highlights the depth and variety of Deva’s talent. The whole collection also features her most recent release, Keshava Madhava, an expression of pure, devotional bliss, a haunting celebration of Krishna, which showcases her development both as a singer and a musician.

Deva Premal was born in Germany to parents versed in the Hindu philosophy of meditation and chanting. From the time she was in her mother’s womb, her father chanted the Gayatri mantra to Deva each night, as a lullaby, and the mantra has played a key role throughout her life. She journeyed alone to India as a young woman, where she met the English musician Miten at the ashram of the world-famous guru Osho (aka Bhagwan Shree Rajneesh). Premal and Miten began travelling the world together in the early 1990s, sharing the meditations and sound healing techniques that they had learned at the ashram. They have since released many best-selling albums – both individually and as a duo – and performed in more than 45 countries. Their admirers range from Tony Robbins, HH Dalai Lama to Cher, who continues to feature their version of Gayatri Mantra on her 2020 world tour.

Grammy-nominated, with 1.5 million album sales and a million+ monthly Spotify listeners, Deva Premal and Miten are modern day spiritual nomads on a mission to share the medicine of Sanskrit mantras with the world.

CHER: “My favorite CD to do yoga to is Deva Premal’s The Essence.”

Bandcamp Daily  your guide to the world of Bandcamp

New sounds from Mavi, Ivy Sole & Moderator, plus AJ, the One joins the show, for her latest release